Something amazing happened this weekend: one movie kept four kids and two adults (including yours truly) completely spellbound. The kids are ages two, three, eight and thirteen – and while they range in ages, they are all imaginative, creative and energetic. It’s rare to see them sit still – and certainly not for 101 minutes. 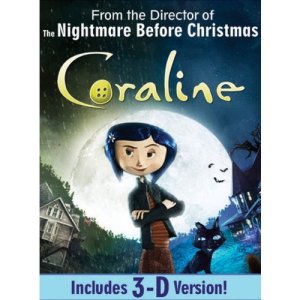 What had us so riveted? Coraline.

As watched, I was fascinated by the stillness in the room. The youngest kids weren’t even that captivated in the movie theater when we saw G-Force.

I started thinking about the elements of storytelling, something I’ve highlighted here before. Here are three elements that stood out in Coraline.

Coraline’s story is universal. We all related to it. We all have parental figures and, at some point in our lives, we’ve all felt that we weren’t appreciated. We’ve all wondered what it would be like to be with another family or in a different situation. Or, at the very least, we could relate to wishing for something other than what we have.

We were shown, not told. Even my two-year-old niece could pick up Coraline’s sad or frustrated facial expressions and could hear her emotions in her voice. The body language also stood out, with Coraline’s busy parents talking to her without stopping their work, without facing her. (Writers don’t need an illustrator or animator to do this – you can create the same effect by describing the scene as it unfolds.) We didn’t need to be told that Coraline was upset.

The characters were well developed. So many movies created for anyone under 18 are filled with character sketches. Coraline was bursting with characters who had their own histories, motivations and emotions. Even though we could see that her parents weren’t paying attention to Coraline, it was clear that they were struggling to achieve something with their work. The villainous “Other Mother” was not simply evil; we saw that she was motivated by find someone to love her.

Okay, so maybe some of this was not apparent to the kids under age eight. But I’m still moved by how Coraline captured – and kept – our attention for 101 minutes.

What makes a story great to you?

5 thoughts on “What Coraline and Kids Taught Me About Storytelling”